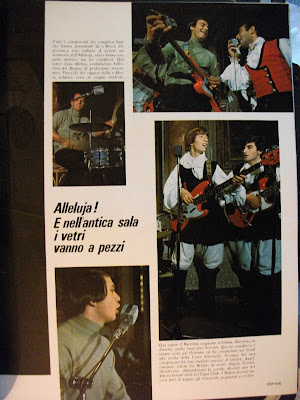 At the conclusion of the performance [of the first rock mass] the bands stayed on stage while they waited for Father Sinaldi to join them and lead the discussion on the results of the experiment.

It didn’t go according to plan. Before Father Sinaldi could reach the stage and pick up a microphone, a vocal explosion erupted inside the Oratorium.

A considerable part of the debate was based on the music’s relevance and place in liturgy, that is its place in the actual rites of a Mass.

The debate that was to rage for years—and still does today—started with one student asking, "How can this music become part of the liturgical music?”

A friend of one of the bands responded, "This is not sacred music. You have to experiment with what spirit the youth of today can approach the liturgy."

Father Sinaldi as moderator, added, "Of course we must not judge the intentions, but the results. If this music is artistic, fine. That’s what counts. On the other hand, the music is defined as religious, but not sacred or liturgical."

This comment by the father was a direct reference to Vatican II stressing the need to ‘admit to divine worship all forms of true art having the needed qualities’.

The comments, questions, points of view and arguments put forward were widely varied. Even the priests themselves were divided.

Some of the young people who spoke appeared better prepared than their older opponents.

One opinion on the negative reviews was that they were a knee-jerk reaction to the over enthusiasm of the young spectators with their thunderous applause and whistles of approval.

There was even a racist, inevitably present at all these events, who snatched the microphone from the hands of Father Sinaldi, to cry out, "We're not in Africa! It is devil's music."

And so the debate continued as priests close to the stage shuddered, a thousand questions on their tongues.

Maestro and priest Father Belli, Director of the Augustinian, tried to explain the basic principles of religious and liturgical music but was drowned out by the many conflicting views.

In reply to the young people claiming they had the right to worship in their own way, he stated, "There is no Mass without liturgy."

"But there are Masses not dedicated to the celebration of the rite," countered Sinaldi.

Belli argued, "It is not true. They were all written for the purpose of the liturgy. Only the concerts are not performed in church for the difficulties of the execution. But Verdi's Requiem, for example, was carried into the church."

Father Sinaldi asked, "Have you finished?"

Father Belli replied, "No, I asked if this music has a liturgical perspective. You answered ‘no’ and I am convinced. Then you say it is only religious. So I say, don’t the words make any music religious or sacred? This music does not invite your reminiscence and meditation, but teases and does not dig into the soul. "

“It is about praising God with happy music and happy thoughts” shouted a young man from the back.

Applause and interjection erupted from various quarters. From the young people who were in favour of the beat Mass, to Father Lopez Calo, commentator of Radio Vatican, who was against the Mass and back across the spectrum to Father Marsili, president of the liturgical San Anselmo, who supported it.

Father Sinaldi declared that he was satisfied that the Mass had been a success and this was evidenced by the participation and enthusiasm of the young.

Prior to the debate, Father Gino Bono had told a newspaper reporter, “I think the work is neither blasphemous nor disrespectful. Moreover, the texts of the songs are literary translations from the Latin Mass of the steps. It's just a form of attracting young people to the Church. Naturally, it is not a true Mass. We must make a distinction between religious music and sacred music. Before arriving to perform this music in the church, we must wait a whole series of consensus. Do not forget that we are in Rome, the centre of the Catholic Church.”

What wasn’t made clear was if the outcome of the consensus was against the experiment, particularly as it was in Rome ‘the centre of the Catholic Church’ that the Vatican would use interference and obstruction as a means to wipe it out.


Posted by Random Jottings at 12:07 No comments:

A Burmese Cat Called Sultan– aka Satan, aka Sultille O’Neal

Sultan was the first and only cat that was really mine. We had cats when I was a kid but they were generally closer to my mother than anyone else in the family.

He was a dark brown Burmese I got from a breeder, Christine Atkins, who was a close friend. She convinced me Burmese were not like other cat breeds – they more doglike. How right she was!

The first thing I was thankful for with this breeder was all her kittens and cats were trained to use a litter box.


Apart from me having to cope with messes during the training period, it meant he would live inside and not have to go out to the ‘toilet.’ Which incidentally was another condition of her contract. Any cat she sold had to be an indoor pet and not allowed to roam. This is something I genuinely appreciated. – see my blog, Please Keep Your Cat Inside https://pamelakingrandomjottings.blogspot.com/2018/10/please-keep-your-cat-inside-updated-blog.html .

He was independent and cheeky but very affectionate. I don’t know what was in my make-up but he loved to lick it off my face. 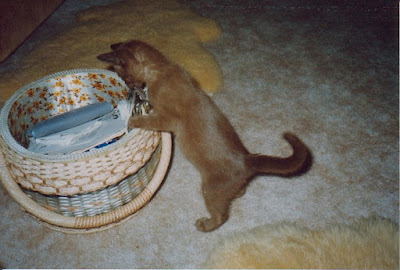 Of course, he got into mischief. He chewed my indoor plants, the nose of my life-size wombat soft toy and the hand of my grandmother’s old doll.

He was a handsome cat and Christine thought he may do well in a cat show. (She was one of the leading breeders and her house was adorned with ribbons and trophies.) Agreeing she could take him along he did well and showed promise. Excited about his results she asked to take him to another show.

About mid-morning of the second show, I received a phone call from Christine. ‘Come and get your cat! He’s disgraced himself and is under the table in a cage!’ I quickly jumped in the car to collect my beloved boy and find out what all the fuss was about.

When judging time came Sultan attacked not one but all three judges. A friend of Christine’s, tongue in cheek, assured me all was well there were no lights and sirens when the ambulance left. Sultan wasn’t invited to another show. 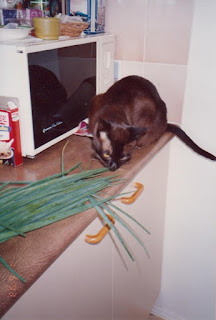 He would jump up on the kitchen bench and eat the strangest things. One of his favourites was spring onions.

One day I was given two freshly caught trout. It’s a fish I am not fond of so I popped them under the grill to cook for Sultan. When they were finished, I left them there, closed the grill door and forgot all about them. Next morning, I found two fish skeletons on the kitchen floor completely cleaned of all meat. Sultan had jumped onto the stove, flicked open the grill door and helped himself to supper.

The greatest fun my son, Clinton, and I had was using a ping pong ball to play piggy in the middle – Sultan being the piggy in the middle of course.  We would toss the ball high between us and Sultan would leap higher than our head height to catch it with his paws. He would also retrieve tossed toys tirelessly bringing them back to be thrown again.

But, Clinton’s playtime with Sultan around wasn’t always fun. He loved his Matchbox cars and playmat with roads and buildings on it. He would take ages to set up stories of accidents, road works, fires etc. Sultan sat quietly on the side watching. Just as Clinton finished the layout, Sultan would dive under the map scattering cars, detour signs and trees across the lounge room floor.

A friend lived in the same villa complex as us. She had a large grey three footed cat called Noah. Like me, she did not let her cat out to terrorise birds so her mother made harnesses for Noah and Sultan so we could take them for a walk much to the amusement of passers-by. 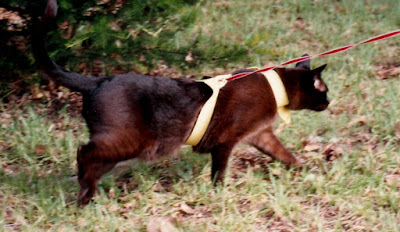 I’m primarily a dog person but if I get another cat there is no doubt it will be a Burmese.

Posted by Random Jottings at 18:15 No comments: